Vision for the Green Line moving forward: a focus on accessibility for everyone

The effort to improve Commonwealth Ave Phase 2A is well under way and there are many proposals to fix the sidewalks and the bicycle facilities that are under discussion. For this post, though, I want to discuss the MBTA Green Line, because of the reservation that runs along Comm Ave, as well as the ones that are on Beacon Street and Huntington Ave. 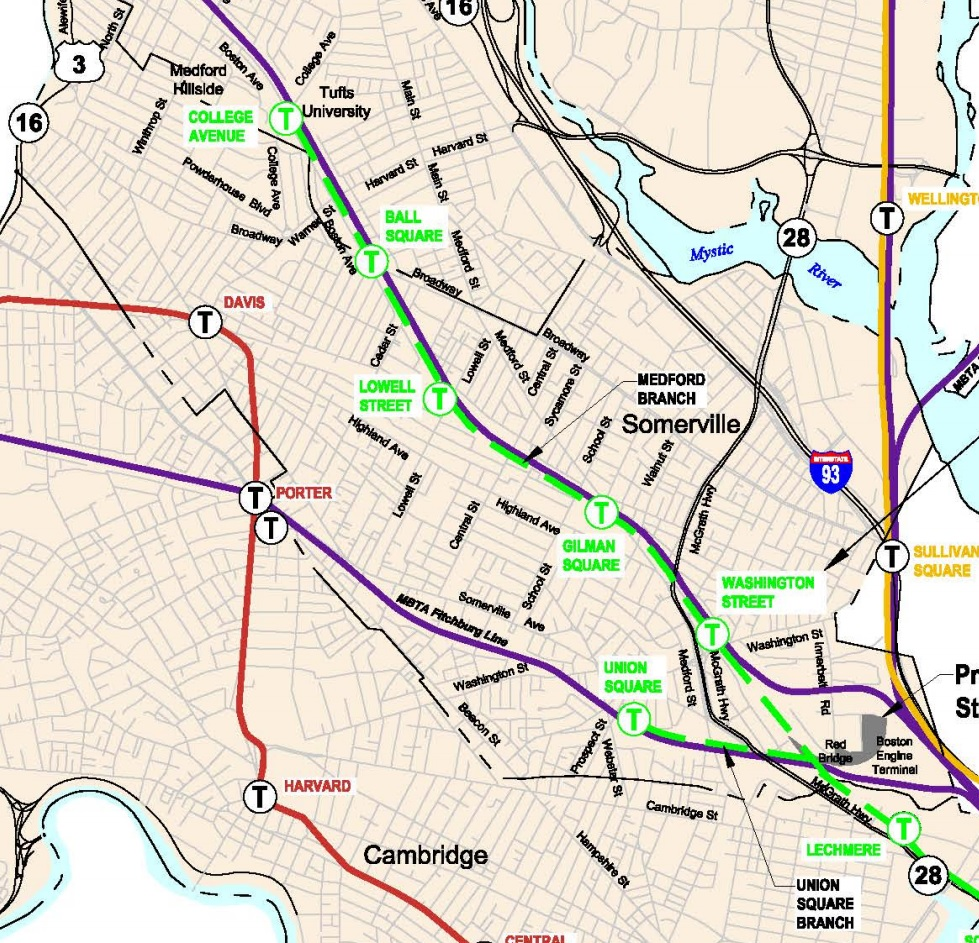 Generally, when other people speak of "vision" in relationship to the Green Line they probably are thinking about the Green Line Extension project at the other end in Cambridge, Somerville and Medford. That is certainly an exciting project and will make a huge difference to people living there. It's also making a big splash at $1.3 billion. However, in terms of big infrastructure, it's a decent move even at the inflated price, because it has the potential to attract many tens of thousands of riders. The main thing here is to ensure that the project is seen through to at least College Ave. Pushing for extensions to Route 16, and along the Fitchburg branch to Porter Square, are possible thoughts for the future.

The vision I have for the Green Line does not involve any further extensions, however, although it does not preclude them. After the bulk of the work on the GLX is complete, with the to-be-built Brickbottom Yard in place, the Green Line will be in a "balanced" form for the first time in modern history, with major maintenance and storage facilities both west and "east" of Park Street station. Plus, hopefully by that time, the MBTA will have concluded enough of its "power study" to comprehend what, if anything, needs to be done about the traction power system. And we'll be closer to having some new vehicles, beyond the 24 ordered for the first segment of the GLX. All this infrastructure should enable easing some long-standing Central Subway scheduling and congestion difficulties. But infrastructure is only part of the story.

Jarrett Walker made a good point in a recent post where he said that transit infrastructure does not cause ridership -- transit service causes ridership. And that is true: the frequency, reliability and speed of the transit service is what attracts (or repels) ridership. The Green Line could most certainly use improvement in frequency, reliability and speed. Although the schedule is fairly frequent, the reliability of that schedule is poor, leading to common cases of train bunching and overcrowding. The speed is well, ..., legendarily slow. The at-grade segments average between 6 and 9 mph normally, making them slower than a typical human runner. So there is definitely room for significant improvement. But I doubt that Jarrett is thinking about systems like the Green Line -- which, despite its problems, does attempt to have good frequency and attract strong ridership. He is thinking of newer systems such as Salt Lake City's S-Line that is both slow and infrequent.

But the Green Line does demonstrate a point that qualifies as a slight quibble with Jarrett's argument. Yes, it is true that service levels are the most important feature of a transit system. But there is an infrastructural component that I think also qualifies as a form of "service" and that's accessibility. You could build the most wonderful light rail system in the world, with a train every few minutes that takes you speedily to your destination, but it would be totally useless if you had to cross a dangerous high-speed roadway just to get to a station. Or if the station was designed with so many fences and obstacles that just getting to the platform is a journey in itself. Obviously this is a huge issue for people with disabilities, and 24 years after the passage of the ADA we're still far behind where we should be. But accessibility is also an issue for people without disabilities. First of all, just about every person born in this world will probably deal with some kind of mobility limitations of the course of a lifetime. Whether it be broken bones, aging knees, arthritis, or anything else, it still shouldn't disqualify you from being able to access public transportation. And even if you are fortunate enough to be in perfect health, you are still probably less likely to use a service if the access path to reach it is long and arduous.

Furthermore, all these problems are exacerbated if you have to climb steep stairs to get on or off the vehicle. And if you have to push and shove through a crowd just to get to a seat -- or even merely an open space for standing. And then push just to escape from the tiny front door, and be forced to climb down those steep stairs again.

I bring this topic up because the Green Line has a serious problem with poor accessibility, both for people with and without disabilities. And it's completely unnecessary. In theory, the surface Green Line could be the most accessible of all the segments of train lines in Boston. The platforms are at the same grade as the sidewalk, which means no stairs nor elevators needed. The tracks naturally guide the vehicle close to the platform edge, nearly the same place every time, without any additional effort from the driver. We have the technology that makes low-floor vehicles possible. Modern fare collection systems can work at any door. Using the Green Line could be as easy as walking through the entrance of a building.

But in practice, it's not. People with disabilities consistently rate the Green Line as one of the worst to use. Everyone else just seems to put up with the problems. The MBTA actively makes life worse for its customers by choosing the most bizarre and inefficient operating procedures. I understand that there are fiscal constraints preventing the T from replacing the existing high floor vehicles (which are also, alas, the only reliable vehicles in the fleet). I understand that there are historical constraints in the tunnels preventing the T from purchasing widely-used, modern vehicles (although I think they could try harder to fix some of these longstanding issues). But there is really no excuse for refusing to open up all of the doors of a train at every single station (especially the low-floor doors). There is no excuse for failing to implement the modern fare collection method that SF MUNI now deploys system-wide, and that even the MBTA was going to adopt until they mysteriously decided to give up trying, a few years ago. And there is no excuse for designing stations in maximally obnoxious ways that seem to be catering more to the desires of speeding car drivers than to the needs of transit riders.


Here's my vision for the MBTA Green Line going forward: doing all the little things right, the way they should have been done years ago.

These reforms are relatively cheap up front and will save money over the long run. And by relatively cheap, I mean compared to the cost of massive capital expenditure such as extending the subway. Plus, putting the train underground causes you to lose that accessibility advantage. And anyway, it's not necessary to do expensive grade separation in order to achieve significant service improvement. We're more than capable of doing much better with the existing tracks.