While walking to the supermarket today, I passed by a trolley boarding a line of riders, at a station platform. One person would step up to the top stair, pay the $2.10 fare, and go inside. Then the line would slowly move along, trudging through the wind and snow.

At the supermarket, I collected my food and items, went to the self-checkout aisle, rang up $33, and paid it. I took my receipt, my bags, and went home. All of this accomplished without any waiting on line, nor with any interaction by a store employee.

As I was walking out the door, I realized how bizarre the difference was: I could be trusted to ring up and pay for $33 of assorted items at the supermarket, but not a $2.10 trolley ticket nor a $1.60 bus ticket. And that's hardly unusual. Many retail businesses have moved to the self-checkout model. It's a natural way of cutting costs and speeding up service, especially in the modern era. Yet, the MBTA continues to waste money, and everyone's time, delaying trains at stations while riders slowly file through a single door.

The stakes are higher for the T than for a retail shop. Delays to a transit vehicle add up and propagate. The long line at the station platform translates to a train that's late. Bunching gets worse. Lines get longer. The average speed of the system drops below 7 mph. Riders get antsy. Half-hour trips stretch out into an hour. People can't get on or off the vehicle easily anymore, while the driver hoarsely shouts "move to the rear!"

In fact, it's such a good idea, that in San Francisco, the local agency MUNI decided to transition to all-door boarding on all of their vehicles. In the past, I have commented on my experience with MUNI's all-door boarding system. MUNI has a lot in common with the MBTA: an extensive subway-surface trolley network that uses light-rail vehicles nowadays, and many connecting buses.

Recently, MUNI released a report on their experience allowing all-door boarding of buses and trolleys system-wide. It has been a great success. The MUNI report identified three key findings:
I hear that, especially after this winter, the MBTA is looking for opportunities to do more with less. How about a method that is proven to improve reliability, reduce costs, and generate positive cash flow? What are they waiting for!?

And, why not do exclusive transit lanes, signal priority and parking management as well, while they're at it. It looks like they have a willing partner in the city of Boston.

The city is holding their long-awaited Comm Ave Phase 2A public meeting on Tuesday. This deals with the segment of Comm Ave between Packard's Corner and the BU Bridge (non-inclusive). One of the biggest topics of contention has been whether or not the bike lanes would finally be fixed on Comm Ave to match the Boston Bike Network plan for having a protected bike lane on Comm Ave.

Good news seems to be that they will be presenting some kind of protected bike lane option at the meeting, so that represents a major step forward for the city. The precise details remain to be seen.

Another one of the major problems on the street is the lack of a crosswalk at Alcorn Street and Naples Road. On one side is a densely populated residential area, on the other side is the neighborhood supermarket. Most people simply wait and cross the street over the tracks when clear. But, the engineers believe that people should be walking over 1,000 feet out of their way, traversing 6 extra traffic lanes and waiting through extra cycles of the traffic light, simply to get across the street. While carrying heavy bags. This is a clear case of a disconnect between the planning department -- who only see this street on paper -- and the people who live here. 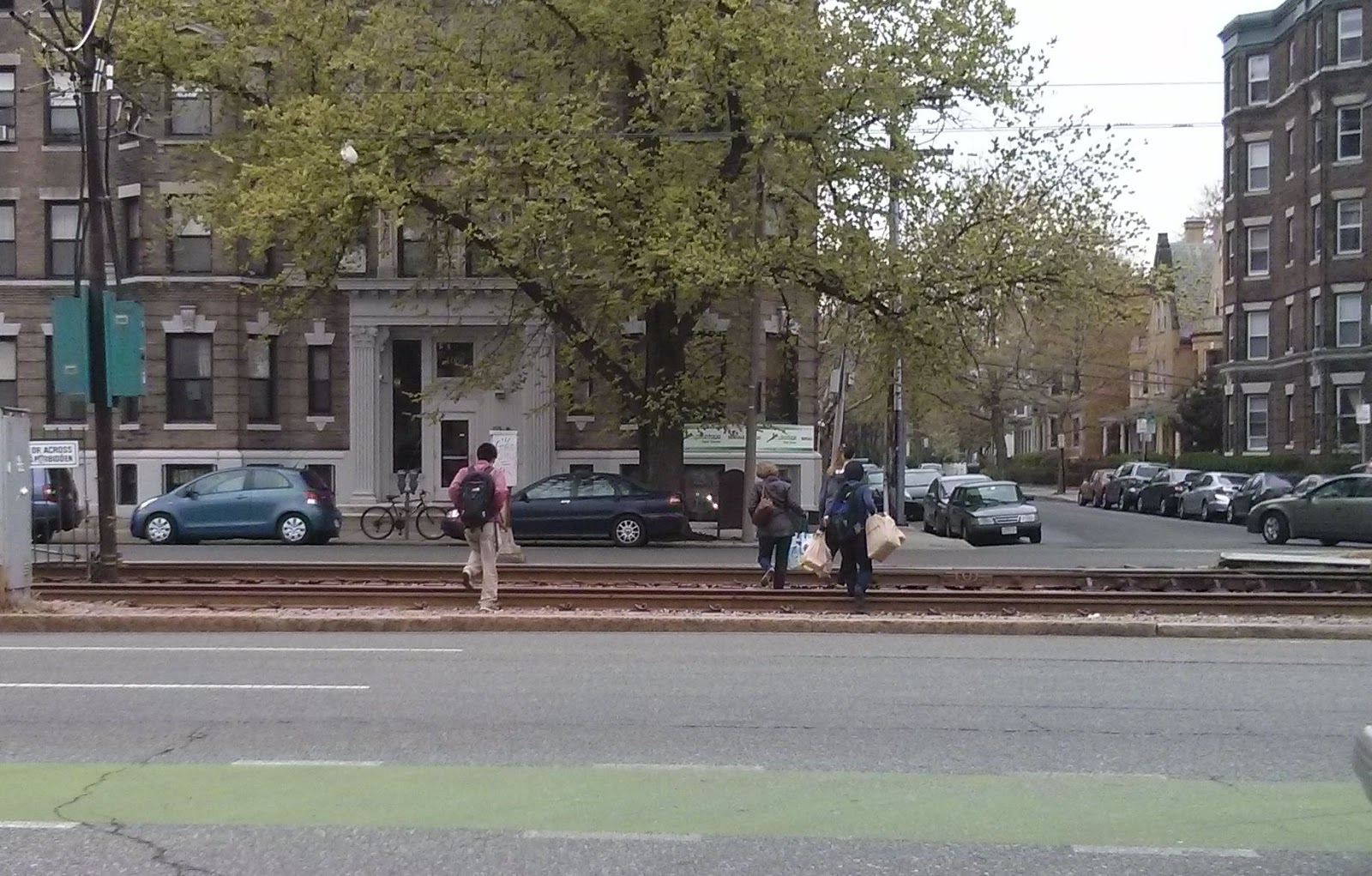 Even in the heavy snowfall, people would still rather cross here than go around the long way. 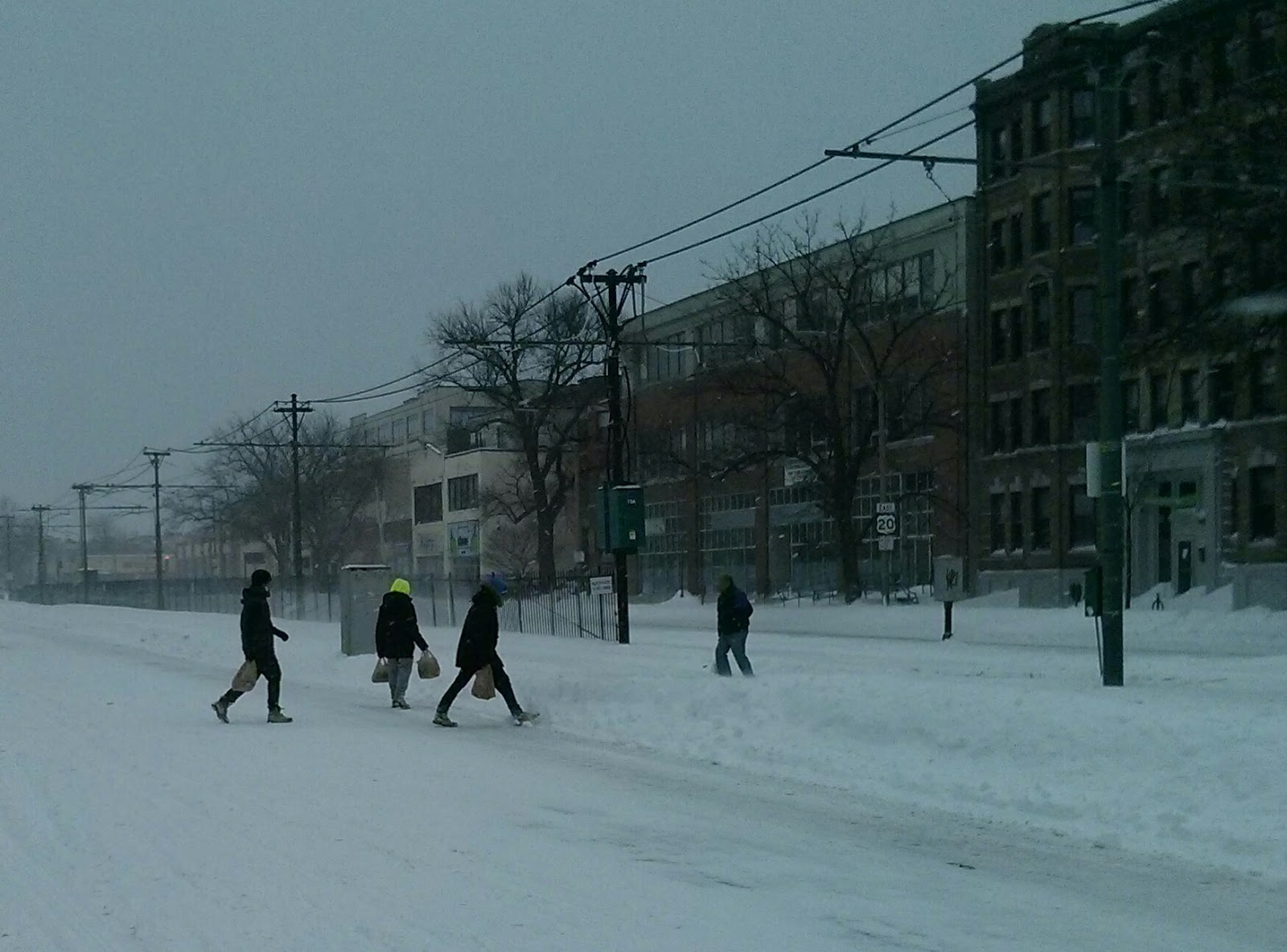 So, while there has been a great deal of progress made on the design, compared to where it was 3 years ago, there is still some more to go.

Finally, I would like to mention that although the MBTA has finally put out a plan for much-needed station consolidation, it is not clear that they will be ready to go before the city starts the reconstruction project. That will put us in the absurd situation of rebuilding the street around the 4 old stations. Then, presumably, the MBTA will come along and cut those out, and rebuild 2 properly accessible stations, but at that point they will simply leave the old station locations as dead space. That's a terrible waste, and a lot of extra pain too -- as the time period of construction would be lengthened. It seems to make a lot more sense to simply get both projects done simultaneously, so that the new street doesn't have to waste space, and so that the station construction can proceed in parallel with the street reconstruction, in a fully integrated fashion.

The scourge of single-story retail

A curious pattern exists in Boston (I've also noticed it in other American cities). Neighborhoods that were primarily developed between 1890 and 1960 tend to have a lot of single-story retail. Oftentimes those retail shops are adjacent to multistory residential or office buildings, but the retail buildings themselves are single-story. Many of them are cheap boxes that look awful, while some of them do have decent architectural features that seem strangely out-of-place.

I'm sifting through some of my pre-snowpocalypse photographs for this post, so we can remember Boston as it once was.


In a city with an acute housing shortage, where space is at a premium, why do we allow so much waste to take place? It seems like there are hundreds of thousands of people who would like to be able to live in these neighborhoods with decent local shops, and in some cases, places that are only steps away from frequent MBTA service. Multistory buildings with ground floor shops and upstairs residences are not new in Boston -- they were quite commonly built in the 18th and most of the 19th centuries. The oldest neighborhoods in Boston: Beacon Hill, the North End, even the Back Bay, all have streets lined with buildings that have ground floor retail and homes above. Yet, starting around 1890 or so, it seems, some kind of insanity gripped America: suddenly, neighborhoods started being developed with apartment buildings on one block and single-story retail on another. Sometimes even on the same block.

I don't have a definitive answer, but there are several pieces in play:

So, as a result, we have a bunch of neighborhoods where, if you somehow transported some people from 1915 one hundred years into the future to 2015, they might ask: "Why do you still have all these same crummy, single-story buildings that existed in my time?" ... After, of course, catching up on the past hundred years of history.

If we are serious about tackling the problem of rising housing costs and creating a better, more vibrant city that is accessible to all, then we will need to find a way to deal with these squat, inefficient, single-story structures. I often hear people complain that Boston is space-constrained, that we don't have room for development. That's not really true, as there are too many vacant parcels. But there are also many underutilized parcels in locations that can easily support much more. The replacement of single-story buildings that are located adjacent to frequent transit ought to be a high priority for all of the cities and towns in the region.
Posted by Matthew at 11:28 AM 5 comments: