My impression: It seems like it's just another set of wildly Utopian schemes along the lines of Ebenezer Howard's "Garden Cities." Except, instead of returning people to the farm, it's returning the farm to the city. The goal seems to be the same: curing those wicked sinful city folks with some virtuous farming and "green" space (of a sort).

However, if for whatever insane reason "vertical farming" takes off, I will then propose a revolutionary idea: "horizontal farming." It's where you go out to a place with lots of cheap land, abundant water and sunshine from the sky. Then you use the natural dirt and soil to grow lots of crops at very low cost, using machines such as "tractors" and "combines" to save labor. Finally, you ship it off to market using a highly efficient, fancy new technology called a "freight train." This lets you free up all that valuable land occupied by vertical farms in cities, turning it over to be used by much needed housing developments, employment opportunities, schools and parks.

Posted by Matthew at 8:03 PM No comments:

Fifty years of the MBTA: where is the vision?

Yesterday, I was riding the T towards home with a friend who lives nearby me, and I mentioned that I had canceled my monthly pass for the remainder of the summer. The value proposition just isn't there for me anymore. At least, so long as the weather remains decent, I'm not sure I will be able to use up $75 in stored value. He said that he was mulling the same issue, because at $75, it was more of a struggle for him to afford. But then he surprised me: "the fares go up regularly now, but the MBTA has no vision, no plan for improvement, no sense that things are going to get better in the future." This is coming from a person who is just a regular user of the system, not someone who probably spends too much time thinking about urban transportation issues. And, I have to admit that I am forced to agree with him.

Today is the fiftieth anniversary of the formation of the Massachusetts Bay Transportation Authority from the ashes of the Metropolitan Transit Authority, on August 3rd, 1964. The new authority was intended to unify mass transportation operations in the greater Boston area under one umbrella, a much larger scope than the old MTA. And in some aspects, it has been successful, or at least, impactful. The iconic Ⓣ logo, the famous color-coding of rapid transit lines, the death and rebirth of commuter rail, the consolidation of management, the expansion of the Red Line, the controversial Orange Line relocation, and many other things.

The long term vision for the MBTA is called the Program for Mass Transportation (and yes, there is a broken link on their website, and this is where it's supposed to go). If you look through the Progress document, you'll see that most of the accomplishments are things like replacing vehicles, doing maintenance on right-of-way, improving accessibility, etc. I do not want to disparage any of those activities: they are very important for the proper functioning of the system. But they are not the kind of accomplishments that are going to constitute a "visionary step forward" for transportation in the Boston region, as seen by ordinary users. Actually, most of what's listed under progress are fixes that should be taken as a matter-of-course: yes, stations should be accessible, vehicles should be in working order, and tracks in good repair. That goes without saying, really.

But what has actually been accomplished in terms of expanding the "good transit" system in the past fifty years? Much of what was done was proposed, in at least a similar form, on this 1945 map from the old Boston Elevated Railway:
There are some things on this map that are dead letters: such as the configuration of the Red Line past Harvard, which was later designed to curve north towards Davis and Alewife instead of through Watertown. But much of what was accomplished is represented here, in a plan from 1945. Several extensions were built prior to the formation of the MBTA: what we now know as the "D" branch of the Green Line, and what we now know as the Wonderland extension of the Blue Line. After 1964, the MBTA built: the Braintree branch of the Red Line, and the extension of the Orange Line through Malden. They also attempted to build the Red Line to Arlington via a different route than shown, but were blocked by NIMBYs and cut short to Alewife. Since then, most expansion ideas have focused on what's shown above:

Actually, the last proposal is somewhat similar to something that showed up earlier this year:
Although this looks something like a "visionary plan" (hey, it says "Vision"), it's actually rather disappointing, despite the busyness of the map. In 1945, the transit commission envisioned vast sweeping expansion projects that would unite the region. In 2014, MassDOT envisions dinky diesel powered traincars that, at best, come every 15-20 minutes and only cover a small amount of territory. Also, several of the proposals are dead on arrival. Cambridge won't tolerate frequent closings of crossing gates on the Grand Junction, they even rejected infrequent commuter rail. The Track 61 connection between Back Bay and the Seaport is completely absurd, as it crosses just about every south-side railroad line at-grade. West Station is still hot air, despite recent commitments to plan it as part of the Allston I-90 Interchange Improvement Project.

The Program for Mass Transportation from 2010 lists several projects that are opportunities for system expansion and enhancement:
While, in the meantime, people who walk to stations are treated to this: 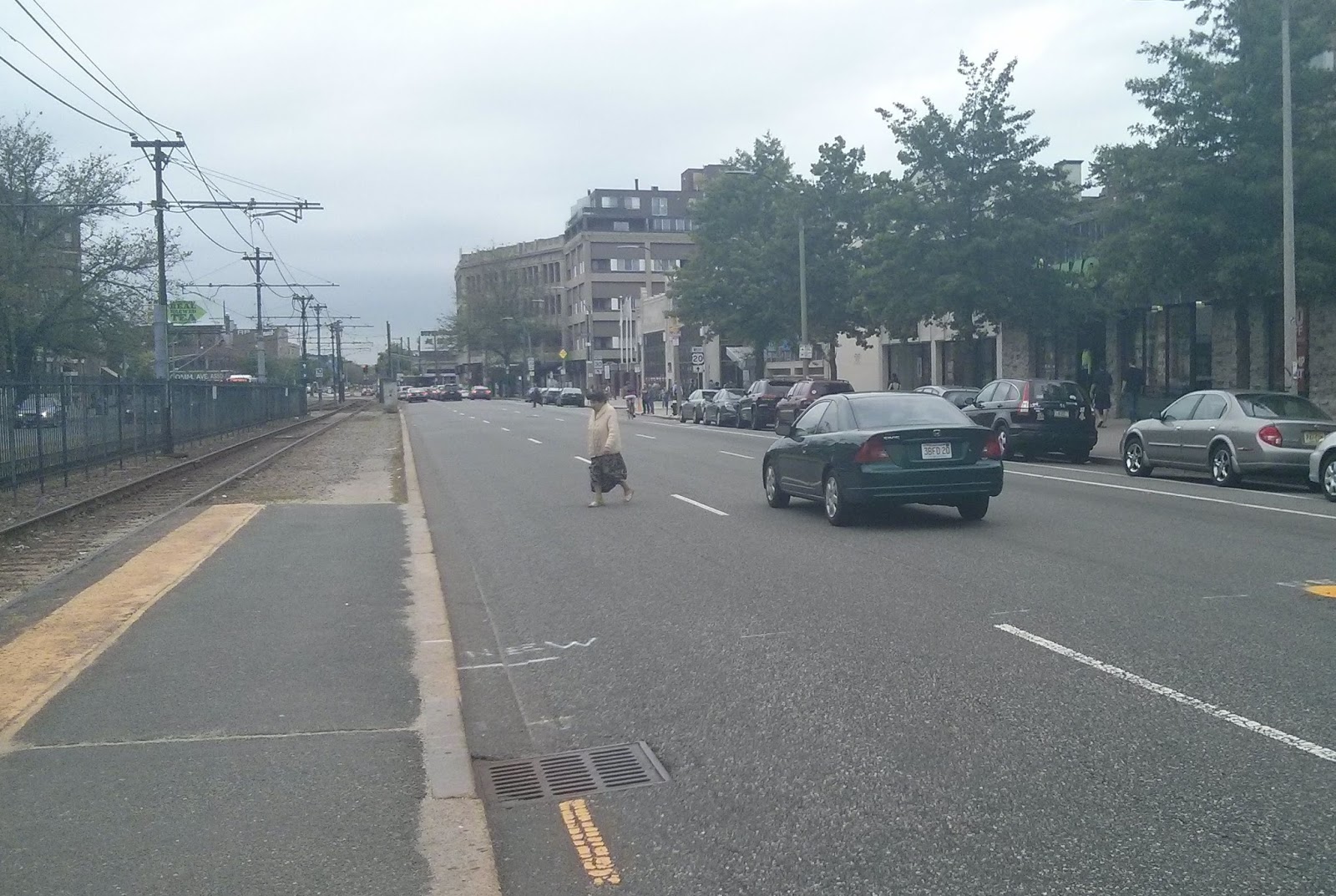 The difference is simple: the MBTA primarily sees itself as a means for getting 9-to-5 commuters from parking lot to downtown office building. Their decisions make a lot more sense when viewed in that light. Of course, not everyone thinks like that, and there are good folks there trying really hard to make things better. But institutionally, the agency was born in 1964 and still thinks like it is 1964.

Going back to the big-ticket items listed in the PMT:


So that's where we stand with the MBTA's vision. Parking garages, dinky diesel powered traincars, insanely expensive commuter rail expansions, and a lot of pie-in-the-sky proposals. Mostly a collection of pet ideas and political footballs, really.

I think part of the problem is that the MBTA only sees itself as a transportation agency. It's a part of MassDOT now, which makes it part of a larger transportation agency. The same problems occur at the higher level too; we have seen, as MassDOT works on redesigning the Mass Pike through Allston, they insist on compartmentalizing themselves with the "we only build roads" attitude.

The transportation-only focus is broken: transportation and land use go together and must be considered together when making plans or changes. If I were to give a set of principles for the MBTA (and MassDOT) to use when considering their vision over the next fifty years, it might look something like this:

At the beginning of this year I started to outline what a set of key urban corridors might look like for Boston. It's a rough draft and limited:


But the idea was to create a vision of where the MBTA and the city could work together in creating strong urban corridors, mostly based on existing bus routes. If the MBTA published a vision in this mold and said that "by 2024, here's where we want you to be able to catch a bus or a train within 10 minutes of showing up," that would be exciting. And if the city came along with a similar plan that said, "here's where we're going to focus on bringing economic development, on increasing housing supply, on fostering diversity, on walking, biking and safer streets," and that plan largely concurred with the MBTA's plan, then that would be exciting. And perhaps, it would represent a realistic vision that regular residents and riders could appreciate.