September 24th is the date of the preliminary election, when the field of 12 mayoral candidates and many more city councilor candidates are pared down to the top front-runners in preparation for the general election on November 5th. This will be the most significant local election in thirty years. The mayor of Boston, in particular, has a large amount of power in setting the policy and path of the city, for better or for worse. There are many areas which must be covered well: housing, jobs, transportation, schools, policing, parks, among others.

The questions I will be investigating in particular are: how will the next mayor calm rising housing prices, foster livable communities, improve walking conditions, encourage bicycling, and push for a better MBTA?

This is not to disparage the other issues, and many of them are connected to housing and transportation. Business owners will be interested in creating jobs in strong neighborhoods near where people live, if allowed. Parents would like to have neighborhood schools to which their kids can safely walk. Families need housing that they can afford and communities they can feel part of. Controlling crime is not just a question of policing but also of urban geography and neighborhood structure.

So with this in mind, here are some links to get started:

Posted by Matthew at 6:00 PM No comments:

Is fare evasion really a problem?

Something that caught my eye in the MBTA ROC report was that it was the first time that I've seen anyone take a real crack at estimating fare evasion. Usually the T just makes up numbers. In this case, it was CTPS that supplied the data, which is found in Appendix D. The ROC is proposing that the student pass program would eliminate the "need" for the "front door-only policy" that is currently in effect. I don't think that the "front door-only policy" was ever a good idea at all, student passes or not, but let's take a look at the data that we finally get to see. 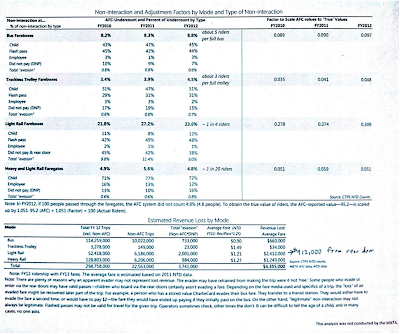 The table at the bottom shows "Non-AFC" Light Rail trips as being about 12% of all Light Rail trips, but there's no rationale given for that 12%. It's hard to reconstruct this number without knowing how many of the trips counted came through fare-gates and how many were surface-originating.

There's a similar problem when comparing the Total "Evasion" count to Non-AFC Trips, which is about 32% but I have no idea where that proportion is sourced from either.

The top table seems to indicate that the rate of people using the rear door is about 9% of riders. Caveat: this doesn't mean they were not paying, it just means nobody checked -- the MBTA's old "Show'n'Go" policy encouraged folks to use the rear door but they would be counted as "DNP" under this category.

At the bottom, there is a handwritten note that $912,000 was lost "from rear door" and this is quoted in the report as "lost approximately one million dollars per year." Putting aside all the other concerns from above, let's assume this is true. The lost million dollars sounds pretty significant, but let's put it in context. The table claims that there were 52.4 million trips on Light Rail at an average fare of $1.21 per trip. That means a total revenue of $63.4 million. If one million in revenue was lost, then that means a loss rate of 1.5% which is significantly lower than 9%, and even lower than past estimates of 2-4%.

In pretty much any system, a 1.5% fare evasion rate would be regarded as a resounding success. Nothing is perfect, and fare collection has very significant costs. Trying to pursue the last 1% could easily cost more than it's worth. And that's assuming that the revenue was "lost" which is not necessarily true. It could be mostly people with passes.

If these numbers are actually correct (admittedly, I am starting to doubt) then there is no reason to pursue fare evasion as an issue. It's a total waste of time and money that will actually cost more than it will collect. And it also harms the riding public, by slowing down trains, bunching them up, dragging down performance and schedules. And that costs real money: if extra trains are needed then you're talking over $200/vehicle hour just to keep on schedule. And that doesn't count the time-cost to passengers on board, something which T management never seems to think about, because they treats their customers like their time is worthless. Likely a holdover attitude from the bad old days of "managed decline": when the T was supposed to die in favor of universal car ownership.

Even if the fare evasion rate was doubled to 3%, that would still not be significant enough to worry about. When should it be worried about? That's easy: when the cost of enforcement is lower than the cost of loss. And the first step towards understanding that is getting real data.

Moral grandstanding about fare evasion is selfish and foolish. Show me the numbers, show me the money, don't waste my time.

Posted by Matthew at 5:15 PM No comments:

The prospect of a student pass program

The MBTA Rider Oversight Committee released an interesting new report on the prospect of an unlimited ride student pass that could be issued through universities to their population. If the university commits to bringing 100% of their student body into the system, then the MBTA can offer a steep discount for the passes. The author went through the trouble of interviewing and collecting data from three other cities: Chicago, Milwaukee, and San Francisco regarding their student pass programs. The second part of the report considers using the revenue generated by the student pass program for funding late night bus service (a.k.a. Night Owl) and some other improvements.

My personal experience with student passes comes from Pittsburgh where I attended my undergraduate program. My freshman year, the university offered a $35/semester unlimited bus pass "sticker" to be applied to our ID card. I didn't know much about the bus system but it seemed to be a no-brainer: I took it. Apparently, many other people felt the same way, because the following year the sticker was automatically bundled with the ID, and that remains the case to this day. I never had to pay cash for an individual ride while I lived there and I began using the bus system quite regularly. Looking back, I realize that this was a pretty significant benefit. The monthly pass cost appears to be $97.50 now, although that is after several rounds of fare hikes and a complete system reconfiguration that happened long after I left.

I don't want to dwell too long on Pittsburgh because they have some other, more fundamental problems to deal with. The question is, should we bring this kind of program here? I believe the answer is: most definitely yes. Plenty of students are already using the T, as anyone who rides it can attest. The value proposition is tremendous, with the discount that can be offered. And the convenience is key. I remember it was always nice to know that a group of us could always easily hop on the bus because we all had passes linked to our IDs. We didn't have to think about it at all. It doesn't seem like much, but it makes a big difference.

I would also like to point out a quote from this article (see also: older article) which popped up last week, about Mark Aesch who found ways to turn a sputtering Rochester bus agency into a lean and self-sustaining success:


His biggest achievement came through securing partnerships with the community. Once bus service improved, Aesch sent out a sales force to college campuses, shopping centers, apartment complexes, and the like, and asked them to pay for the better service that now carried so many students and customers and residents through their corridors. Sometimes he drew a comparison to a utility: just as a housing development might pay the water bill for tenants, so too should it pitch in for transit.

Working out student pass agreements with local universities would fit right into this kind of mold.

Now regarding the proposal to fund Night Owl service this way: it's good that we're talking about bringing this kind of service back, but I'm not sure it should be tightly linked to "student passes" because that gives the impression that the service is primarily for students. It's not. It's for everyone, and it'll be a big boon to late-night workers who need a way to get home, as well as a tool to reduce incidences of drunken driving. That's not to say that we shouldn't use the revenue from student passes to help fund Night Owl, but it shouldn't be linked. Night Owl is a justifiable service that stands on its own. I already wrote about how Night Owl ought to be designed, so I won't go further into that right now.

The MBTA ROC report includes an Appendix D about fare evasion statistics collected by CTPS. The presumption seems to be that students are a prime suspect in fare evasion. Leaving aside whether that is a fair characterization, this marks the first time I've seen anyone attempt to provide hard data about fare evasion on the MBTA. However, I will push this topic to the next blog post because this post is already too long.

Posted by Matthew at 5:08 PM No comments:

Recently the Boston Restaurant Authority has indicated a desire to reduce their minimum soda requirements in new restaurants.

These requirements have been in place since the founding of the BRA in the 1950s, in order to assure that every patron has access to at least one free soda with every meal. In some cases, the BRA had been requiring two sodas per customer.

This measure had been intended to reduce demand for the depleting supplies of on-street soda machines.

Over the years, minimum soda requirements have been blamed for causing over-consumption of sugary drinks. The obesity epidemic, some say, is directly related to the excessive number of soda drinks being forced upon restaurant patrons, whether they order it or not.

"We don't need to push a soda with every meal," Peter Mead, head of the Boston Restaurant Authority, said in a recent interview. He cited US census data showing that one in three Boston residents is between 20 and 35, and most drink water, juice, or beer primarily.

Critics of the new policy claim that elimination of minimum soda requirements will cause a terrible soda shortage, as restaurants may choose to devote resources to other products, such as food. They say this will put a strain on already-short supplies in on-street soda machines.

A local woman complained, "If the BRA gets their way then families will leave Boston and move to the suburbs where they can get soda for free."

Another explained, "While I appreciate the idea of promoting public health, the city's public water transporter, MWRA, is not good enough to replace soda for everyday needs."

"The reality is that Americans love their soda and BRA officials are sticking their heads in the sand," said Charlie Sodalis, "it's policies like this that make me want to dissolve the BRA in a bucket of cola." But, when told that the BRA was the agency responsible for the minimum soda requirement in the first place, Charlie's head exploded in a fizz of cognitive dissonance.

An official said that the city will continue to explore relaxation of soda requirements in neighborhoods across the city, whether in Brighton, South Boston, or Jamaica Plain. This would not prevent people from purchasing and consuming soda in restaurants there, if they so choose, but instead would make it optional.

“We want to leave some room for negotiation in every community,” he said. “But if we don’t start to push people to pay for their own soda and consider other options, then that behavior is never going to change.”

Posted by Matthew at 1:00 PM No comments: