Is the MBTA actually being cost effective?

I spent some time last week perusing the National Transit Database. They collect fiscal and service information from transit agencies across the United States, and publish it in the form of spreadsheets and reports. For example, here is the profile for the MBTA in 2010. One of the things you can see is a breakdown by mode and the various types of expenses. I took the spreadsheet data and plotted a few charts to see how the T matches up against other agencies. 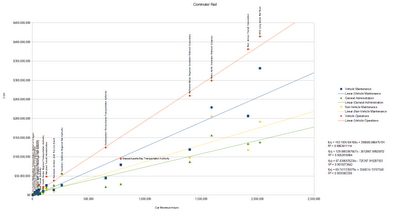 The above chart shows various commuter rail agencies laid out by the number of passenger car revenue hours they operate. The four colors represent the four different categories of operating expense: Vehicle Maintenance, General Administration, Non-Vehicle Maintenance, and Vehicle Operations. Since Vehicle Operations includes the cost of wages for drivers and operators, it comes as no surprise that its trend line is the steepest. It is also no shock that Long Island Railroad has the most revenue hours, followed closely by New Jersey Transit. But if you look back to where the MBTA comes in, the Operations cost per revenue hour is really low. Strangely low, actually. The Vehicle Maintenance cost is also low, the General Administration cost is very low, and the Non-Vehicle Maintenance costs are slightly higher than expected, though well within the reasonable range. So what's the deal? Has the contract with MBCR actually been a bargain? If we take a look at the same breakdown for Heavy Rail, which is provided in-house by the T, then we can see that it is pretty close to average there (NYC MTA is included but far, far off the chart): 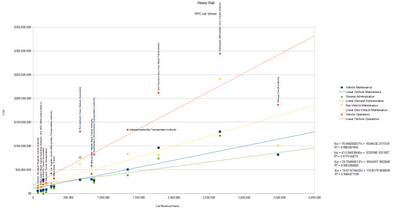 What's different about the commuter rail is that, while overall it is far more inefficient than the subway, there are certain ways it can cut costs which are not acceptable for rapid transit: in particular, the limited or non-existent off-peak schedules. So is that really paying off, or is there something else going on? It's hard to know for sure, and there's some strange discrepancies in the data. For example, while the total annual trip count on the commuter rail is 36.9 million riders according to both the NTD and the 2010 Blue Book, there is a disagreement about how much was actually spent. The audited financial statement of 2010 claims that the commuter rail subsidy was $366 million, but the NTD only has $280 million reported. Even supposing that is due to some classification differences, the total operating expenses of the MBTA was $1.646 billion according to the audit, while the NTD shows only $1.179 billion. I don't currently have an answer for this. It could simply be a difference in the way these reports were generated. Perhaps, when using the "real" numbers, the MBTA's costs fall into line with the other agencies. Or maybe all the other agencies need similar adjustments in their numbers too, and the T still comes out ahead.