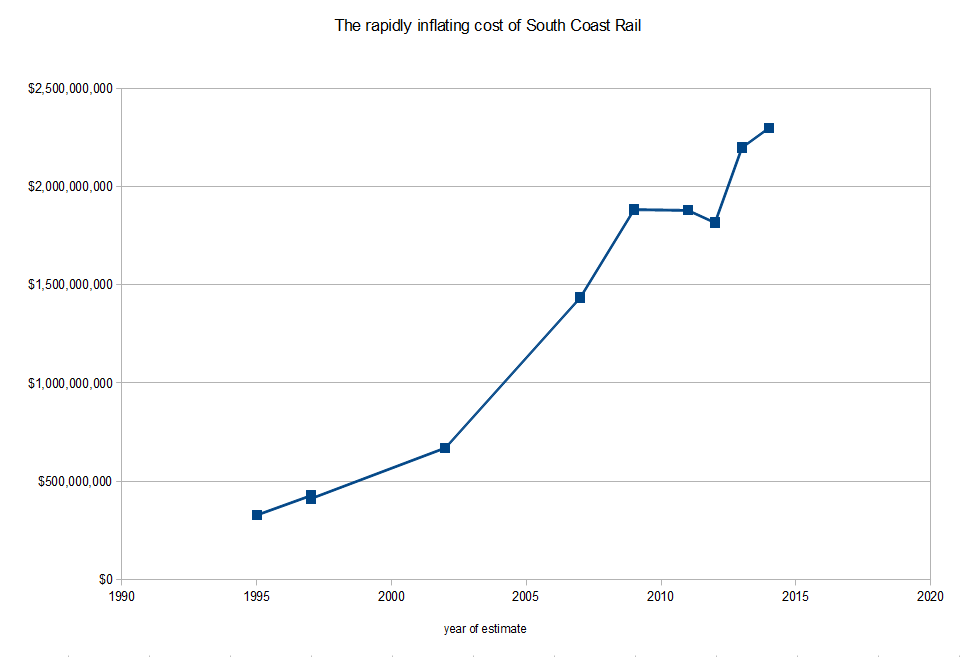 I am a supporter of public transit and the MBTA. Because of that, I feel obligated to point out when transit projects are unutterably bad. South Coast Rail makes a mockery of everything I stand for. We need investment in our transit systems and expansion as well. But we need to do it intelligently, to get good value for our money. Unlike highway-mongers, we must be responsible in the way we spend taxpayer money. Unfortunately, South Coast Rail is wildly irresponsible: at $2.3 billion, it is beyond overly expensive, and it will be lightly used, at best. This is a tragedy in the making, a disaster in slow motion.

Yes, you heard me right: $2.3 billion. A recent MassDOT blog post confirmed the new price tag. As recently as last year it was expected to cost an already-unbelievable $1.8 billion, and now it has ratcheted up another $500 million. I have assembled a history of the cost of this project, as it has zoomed upwards from merely expensive all the way up toward and beyond ludicrous.

Some sources: The Herald News has put together a history article. The Wikipedia page has a decent rundown as well, which served as a starting point. Based on that and more, I've now assembled a spreadsheet with various cost, trip time, and ridership estimates, along with the source of each: usually a newspaper article or official planning document. The chart at the top of this article shows how the price estimates have veered upwards over time. In summary,

For a per-rider breakdown, a section from the Final Environmental Impact Report chapter 3 (table 3.3-6) calculates that the estimated cost of South Coast Rail, both for construction and operation, will come out to be approximately $35.28 per user in 2035. And that number assumed that the capital cost was only $1.82 billion. Using the latest price of $2.3 billion, but keeping their overly generous ridership estimate, I roughly calculated that the daily per-rider cost of building and running South Coast Rail will be equivalent to about $42. And with the more reasonable (but probably still too high) ridership forecast of 4,500 then each rider would have to pay $94 every day in order for the Commonwealth to merely recoup the costs.

Other commuter rail expansions have not cost anywhere near as much. The most recent was little-used Greenbush line, which cost $534 million for a branch of the Old Colony. And that cost included an unnecessary, expensive tunnel that was installed merely to satiate a few NIMBYs. South Coast Rail doesn't involve any tunneling, yet it is projected to cost more than four times as much for a line that is only about twice as long. Greenbush has only attracted just under 3,000 riders, far below its projections. South Coast Rail is only expected to attract 4,570 riders (table 3.3-1): so the reality will likely be far worse.

Comparison to a peer project

South Coast Rail, using the selected Stoughton alternative, involves constructing approximately 52 miles (83 km) of new rail corridor (table 3.2-2). So, the cost per route-kilometer for South Coast Rail is just shy of $28 million, and that seems to put it within a reasonable range (Table 6) for a new-build metro. But this is not a new-build metro. It's supposed to be a low-frequency reactivation of an existing freight corridor as well as a mothballed 12-mile corridor, in a lightly populated mostly-rural/suburban region. It's using a lot of single-tracking, which should be a money-saving measure, but that doesn't really show. By contrast, Utah Transit Authority managed to build a 45 mile-long, similar style of commuter rail line for a total of $525 million. That clocks in at a respectable $7.3 million per km, or in other words, approximately four times cheaper than what's estimated for South Coast Rail. The expected ridership in Utah was 6,800 people, so by that measure the expenditure was approximately $77,000 per person over there. Not so great, actually, but still almost five times better than South Coast Rail's estimated $500,000 per person. We could buy each of the South Coast Rail riders their own personal helicopter for that cost!

The price tag on South Coast Rail is far out of proportion to its benefits and it is ridiculously more expensive than comparable American commuter rail projects. Supporters of South Coast Rail claim that they are doing it all for the benefit of the South Coast. I call bullshit. A dinky American commuter rail line with relatively few trips per day is not going to make a huge difference to the South Coast region, although it will make a huge difference to the consultants scooping up that money. But the real tragedy will be after that $2.3 billion (or more) is sucked dry and clearly wasted, it will be a long, long time before the Commonwealth has any appetite for helping the South Coast in ways that could really work. And that will be a double shame: first for constructing the worst, most overpriced rail line in the country, and second for screwing over the South Coast yet again.