MassDOT has called a second public meeting on the Cambridge Street overpass replacement with some updates. They intend to issue the notice to proceed in the early winter. 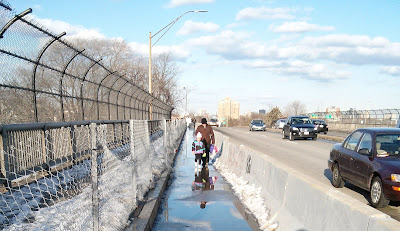 Despite some changes, the plan still calls for a fence down the middle of the street, blocking pedestrian crossing for over a quarter-mile. The plan does not address any of the existing ADA incompatibility issues, and it still calls for mixing of walkers and multiple streams of bikers by the Franklin Street pedestrian overpass.

Several advocates and community members have written a new public letter to the agency calling for more changes to the design. I encourage everyone to check it out and sign it, particularly if you live in the area. I also encourage everyone to come to the public meeting on November 19th, at 6 p.m., in the Jackson Mann school's auditorium.